Introduction
In 2018 AT&T joined the ranks of telcos exiting the capex-intense world that is multi-tenant datacenter services when it sold its datacenter assets to Brookfield, which then formed Evoque Data Center Solutions. Since its inception, the company has been shifting away from the existing model of pure colocation to become a hybrid IT provider. To distance itself from the competition, Evoque is focused on developing a portfolio of services – primarily carrier-neutral connectivity, interconnection and cloud on-ramp services – to better serve enterprise customers rather than targeting the popular hyperscale customer base. To set the stage for this new phase of development, the company has brought in Andy Stewart as CEO and Tom Marx as chief revenue officer, both of whom bring datacenter experience to the executive team.

The 451 Take
Over the last five years, we’ve witnessed in the datacenter industry several ‘carve-outs’ – telcos selling off their datacenter assets to other entities, and frankly no two of those events have been the same. In the case of Brookfield’s acquisition of AT&T’s assets and the subsequent forming of Evoque Data Center Solutions, where those assets now reside, we’re seeing a very methodical approach: the initial step was to get the company formed and its customer base familiar its new owners; now comes a period of industry catch-up, followed by what we anticipate will be a phase to illustrate differentiation. The company’s leadership makes no bones about the fact that AT&T did business in a manner different from how Evoque intends to, and Evoque has spent the last 12 months adding diversity to the networking options available to its customer base. This is exactly what the company needed to do to properly compete in the network-rich world of colocation today. Regarding what’s up next, the provider has stated that it intends to expand its services mix, including blended IP. Exactly what those services will be and how Evoque will deliver them (build, buy or partner) remains to be seen, but it signals interesting days to come for the young company.

Context
Evoque was founded in 2018 from Brookfield’s purchase of AT&T’s global datacenters. The company’s portfolio includes 2.7 million square feet of capacity across 31 datacenters in 11 countries. The first year (2019) was spent transitioning away from AT&T’s tools and platforms while developing a rapport with its customers and building some brand recognition in the industry.

Tim Caulfield was named CEO of Evoque at the outset. Caulfield took the initial carve-out of datacenters from AT&T and helped create Evoque: hiring staff, reassuring clients and marketing the new company. In June, the company hired Stewart to take over as CEO and bring the company into the next stage. Stewart’s experience in finance and managed services will help when dealing with
questions such as which datacenters to upgrade, whether and where new builds are needed, which services to offer, and how to fund their development. To continue bolstering the leadership, Evoque brought in Marx as CRO. Marx brings more than 25 years of experience from CenturyLink, Level 3 Communications, XO Communication and Bank of America.

Strategy
After a steady first year in the business, Evoque is essentially throwing off the AT&T cloak and forging ahead with a broader offering to better match the industry. While AT&T offered some services and had begun the transition to offering enterprise-quality facilities, the communications provider focused primarily on network services with colocation as an add-on, and the facilities lacked carriers to support network diversification.

This year, Evoque has added 37 carriers globally to its meet-me rooms. This brings the average number of carriers to six in North American facilities and 15 in EMEA and APAC markets. To further bolster its move toward carrier-neutrality throughout its footprint, Evoque added Megaport’s cloud connectivity services to four of its datacenters in 2019. Since then, the company has expanded the
Megaport offering to 11 US locations. Evoque’s focus to provide cloud access to its customers was underscored as the company added three cloud on-ramp providers to six of its facilities globally. Evoque recently launch the Evoque Marketplace, offering interconnection services to customers across its footprint to connect customers to carriers, service partners and each other.

While the company is shifting away from the model that AT&T’s customers had become accustomed to, Evoque is bucking the hyperscale trend and remaining focused on midsized and larger enterprise customers deploying 1-5MW of capacity in a variety of industries, including technology, business services, healthcare and manufacturing. The company recognizes that various industry verticals will have unique needs and is developing a vertical-focused sales organization rather than dividing by geography.

Competition
Evoque will encounter a range of competitors since its datacenters are in several geographic regions. For now, the company is still competing primarily in the retail and wholesale colocation segments, but the types and number of providers on that competition list may change as the company develops its portfolio of services. Its most direct competition on a global scale will come from
providers with a geographically diverse portfolio, such as Equinix, Digital Realty, Cyxtera, CyrusOne and CenturyLink. Within the US specifically, Equinix, Digital Realty, CyrusOne, Flexential, T5 Data Centers, Cyxtera, CoreSite, Zayo, CenturyLink and TierPoint will pose challenges. Competition is a bit more wide-ranging abroad due to the variety and nature of markets and includes Interxion,
EvoSwitch, Singtel, Keppel DC REIT, NTT Com, Global Switch, PCCW, iAdvantage, HKCOLO, KDDI Telehouse, CenturyLink and ITENOS. 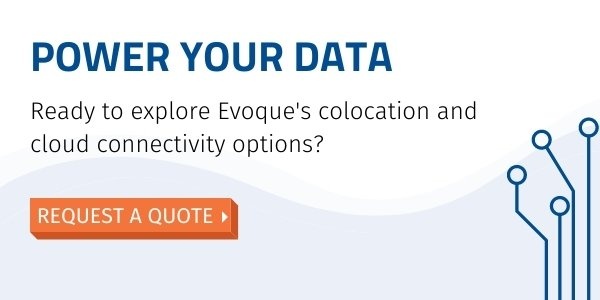