In their rush to implement digital transformation strategies, organizations often discover that they lack the IT agility necessary to achieve their goals. Surprisingly, this applies as much to companies with a long history of deploying technology solutions as it does to more tech-averse digital newcomers. The problem frequently lies with the processes they have in place to manage and replicate the infrastructure that supports application environments. While these processes have lagged behind the techniques used for iterative software development, Infrastructure as Code (IaC) promises to revolutionize how organizations deploy their infrastructure resources.

The Problem with Replicating Infrastructure

When building an application, developers need to continuously deploy source code that complies with the rules of a specific programming language. Over time, that code necessarily changes as new features are implemented and the application’s needs grow. Each time developers build a new iteration of their software, they need to replicate that source code exactly as it existed in its most recent form. They typically do this by utilizing version management tools that logs changes and various fixes implemented within that code so it can be easily compiled or built into new applications as needed. Critically, this process is automated, ensuring that the most up-to-date version of the code is being deployed every time.

When provisioning infrastructure, operations teams have traditionally relied upon manual processes involving executable scripts and (sometimes physical) documentation. Since the life cycle of infrastructure environments is often much longer than software development, the people who initially configured infrastructure resources are very often not the ones charged with replicating it when new environments need to be spun up.

One of the principal problems with this approach is environmental drift, or the tendency of environments to change over time due to ongoing usage and manual administration. These increasingly unique deployments are often referred to as “snowflakes” because they are incredibly difficult to replicate. In most cases, they must be reproduced manually, which inevitably leads to minor differences between each environment, any one of which could introduce errors and bugs into a development cycle.

What is Infrastructure as Code?

Infrastructure as Code (IaC) is an innovative approach to managing infrastructure resources, such as networks, virtual machines, and load balancers, using code rather than manual processes. It involves the creation of configuration files that define the desired specifications of a system and the properties it needs to possess. Once executed, these files automatically provision available resources to create the environment. As infrastructure needs change, the configuration files are updated along with it, maintained within the same sort of version management tools used to maintain source code.

The widespread adoption of cloud computing has made IaC strategies extremely appealing to organizations that have already made the transition from on-premises deployments. That’s because even though virtualization and native cloud development eliminate the day-to-day toil of managing physical resources, provisioning virtualized infrastructure is often still done using the same error-prone manual processes organizations have been using for years. This makes it difficult to realize the full potential of operating within a cloud-based environment.

Benefits of Infrastructure as Code

Automating infrastructure provisioning allows organizations to rapidly scale production environments up or down as demand dictates. This eliminates the headaches associated with spinning up new resources to accommodate development, testing, or production needs. It also makes it easy to shut down environments when they’re no longer needed. Since everything about the environment is being managed as version-controlled code, there’s no fear of losing some critical configuration setting when it’s taken down.

Since IaC allows software developers to quickly provision new environments, development cycles can be reduced drastically. Not only can dev teams engage in continuous development without having to worry about inconsistencies between sandbox environments, but they can also quickly spin up resources to handle various forms of testing and transition to production environments with minimal delays once everything is ready.

Organizations that rely upon manual processes and poor documentation leave themselves open to substantial risk should knowledgeable team members leave for any reason. If only a few people handle infrastructure provisioning and maintenance, it can be extremely difficult and time consuming to recreate their work following their departure. This is often true even when they leave behind documentation since some important details might be omitted or written down elsewhere. Implementing an IaC approach to provisioning resources ensures that critical infrastructure knowledge will remain easily accessible.

Reducing the time, effort, and expertise needed to provision infrastructure allows organizations to utilize their cloud resources and IT personnel more effectively. Rather than spending days or even weeks laboriously deploying and managing multiple environments, developers can instead focus on using that infrastructure to build innovative software solutions that will win new customers and expand market share.

While IaC offers tremendous possibilities for organizations looking to speed up their development timelines and eliminate the burdensome toil of managing infrastructure with error-prone manual processes, not every DevOps team has the knowledge or tools in place to implement this innovative strategy. By choosing a partner with extensive experience deploying cloud-based infrastructure, they can take their first steps toward leaving long standing provisioning challenges behind. Evoque provides organizations with all the resources they need to get their cloud deployment optimized through our Foghorn Cloud Consulting services. Among those resources is Foghorn’s innovative FogSource Code Library, which provides a deep repository of prebuilt code customers can deploy to get their virtualized infrastructure faster than ever. To learn more about how Evoque can help speed up your development process, talk to one of our solutions experts today. 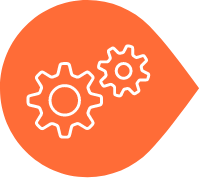